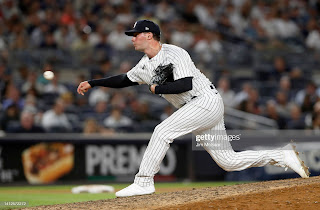 So the Yankees are back to their losing ways with an 8-6 loss to Seattle.

They did have homers from Donaldson, Rizzo and Trevino. But the pitching is still awful. Taillon went 4.2 innings and gave up 6 runs, 5 earned. That just won't cut it.

I still think the Yankees moves are trash and they will continue to suck. The Yankees did get rid of Minor Leaguer (also known as Jordon Montgomery). All I can say is it's about time.

Still have no faith in Montas or any of the other scrubs the Yankees picked up, while all the stupid fans suddenly think Cashman is a genius since he wouldn't trade for the best pitcher available and instead settled for the second best.

The San Diego Padres did it the right and went all in. The way any and every team should. We'll see how it plays out. I hope I'm wrong, but I think the rest of this season, most importantly the postseason will be a disaster.