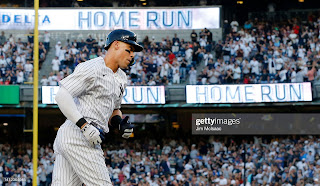 It was a good win for the Yankees. Rizzo hit No. 26, Trevino hit 2. German pitched well. The bullpen was solid.

It was a good day for the Yankees. But all everybody wants to talk about is the moves they made. They picked up Montas and Trivino. They got Effross from the Cubs. But are any of these guys any good.

Personally, I'm not sold on them. Yankees' fans are weak and delusional. They seem to want to always see the good. They believe everything the HYPE Network guys tell them. And most of the time those are lies from people that know nothing. The moves could end up being great, but I'm not a Montas fan. I think he's injury prone and simply not really that good. They should have got Castillo. They should get Soto (but they won't). And when they lose in their first series, remember you heard it here first.

The typical Yankees' fan is like Charlie Brown constantly falling for Lucy pulling the football away at the last second. You do this every year. You get excited because of a bunch of boneheads on TV and social media and you suddenly think Cashman is great -- he's not. He's awful as is Hal Steinbrenner. The Yankees will not win with these two clowns running the show.

The Yankees aren't winning it all, and anything less than that this season is a failure!