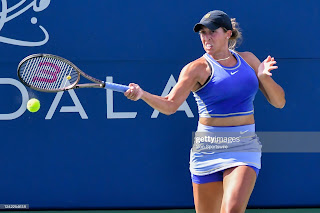 Maddie dominated Zhang 6-4, 6-2 in one hour in the first round of San Jose.

Maddie won more points, 54-39. Maddie won the first set by breaking Zhang in the final game and then dominated in the second. It was a great win for Maddie!

Maddie now plays Ons Jabeur and that will be a tough one. You got this Maddie! If Maddie plays well she can definitely win.