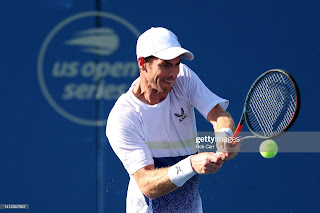 Welp, because Andy is not very good anymore. He's old and, while he might have a good tourney here or there, he's simply not consistent.

He had 7 aces and 5 double faults. Ymer had 62 points to Andy's 56 in the match. Andy only won 65 percent of his first serve, while Ymer won 75 percent of his. Andy had a set point in the 12th game of the first set and didn't take it.

Andy led 6-4 in the tiebreaker and had three set points overall in the breaker. He choked.

Andy did rally in the second set after trailing 3-1. However he was horrible in the third set. He won only 29 percent of his FIRST serves in that set. get a serve dude!

Andy will next play in Canada next week and he will need to play much better.