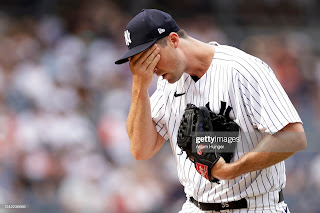 The Yankees suck! Let's just face facts. They are simply not a good team right now.

The Yankees need to make major moves at the trade deadline, which I have no faith they will. First of all, we need a freaking closer. I have not been one who has been on the Clay Holmes bandwagon like so many others. Today he looked like the scrub that I thought he was. Chapman has looked better his last 2 outings, but he still can't be trusted.

The Yankees need at least one more starting pitcher (we still have minor leaguer "AKA Jordan Montgomery" as our fifth starter). There really aren't many good options out there, and most likely we won't get any of the best ones anyway.

It sounds like we are out of the Soto running (not surprising with how spineless management is) and I truly believe we will only make minor deals at the deadline which will make no difference.

We have a big lead, we will make the playoffs. But this team is simply not that good and will lose in its first playoff series (likely the ALDS).

I hope I'm wrong, but I've seen this song and dance before and I don't like how it always ends.