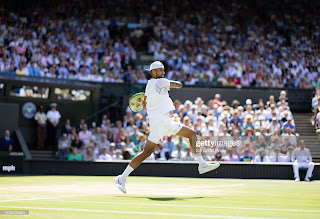 Here's my picks for next week's tournaments! We're finally back to some hard court tennis, with some clay still thrown in.

In Warsaw, I've got Iga beating Tormo in the semis and Martic winning the other semi as well. Iga will beat Martic in the finals.

In Prague (on hardcourts!) I have Mertens beating Muchie and Sori knocking off Krejcikova in the semis. Mertens will beat Sori in the final. Is it me or does it seem like it's always Sori and Mertens in 250 finals.

In Umag, I've got Carlos beating Rune in one semi with Sinner beating Baez in the other. However, I have King Carlos losing to Winner Winner Chicken Sinner in the finals. I think the King will be a little tired from playing back-to-back weeks. He needs to get ready to win the U.S. Open anyway not waste time on clay (yuck!).

At the Generali Open (easier than typing in the town), Ruud will beat RBA in the semis and Berrettini will beat Ramos in the other one. I have a rematch of this week's Gstaad with the same predicted result. Ruud over Matt (I will just call him Matt from now on).

Then there's the big one: Atlanta baby!. U.S. Hardcourts are where it's at!

I've got Nick beating Tommy Paul and Isner beating Big Foe in the semis. Then I've got Nick topping Big John in the final. There will be at least one tiebreaker in that one.