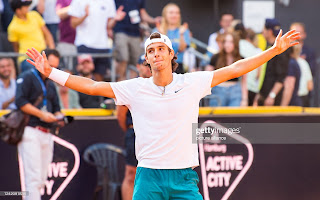 Here's shoutout to all of this week's winners, especially Zo!. I'm really proud of Lorenzo Musetti for getting his first career title and he did it in fine fashion in Hamburg.

Zo came back after losing the second set, after having match points, and won it in the third, 6-4. It was a great match by both him and King Carlos.

Casper Ruud beat Matt in a great three-setter as well in Gstaad. It was Ruud's ninth ATP title.

On Saturday in Hamburg, American Bernarda Pera won her second title and second in a row. She beat Anett Kontaveit in the final. Great job Pera. Anett, you'll get it next time!

In Palermo, Irina Camelia-Begu won her fifth title dominating Bronzetti in the final. Great job by Begu, who won a long battle with Tormo in the semis.