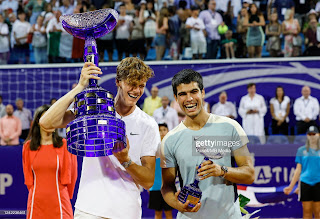 It was another good week for team TKJ in tennis, as more of faves racked up titles.

Winner winner chicken Sinner beat King Carlos in the Umag final in 3 sets. After Carlos won the first set in a tiebreak, Sinner crushed him the last two sets in a battle of two of my favorites.

It was Sinner's sixth career title!

DeMin beat Brooksby in Atlanta in straight sets to win his sixth title as well. The two could meet again this week in D.C.

CarGar won her ninth career title dominating Bogdan in the Warsaw final, after beating World No. 1 Iga in the quarters. CarGar is on a great run, and I'm very proud of her.

Bouzkova beat Potapova in the Prague final for her first career title!

RBA beat Misolic (whoever that is) in Kitzbuhel to win his 11th career title.

A shoutout to all of the winners this week.