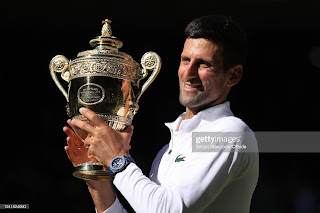 First, congrats to Nole and Elena Rybakina! They both played well and deserved to win Wimbledon titles.

It could be the first of many for Rybakina. Time will tell. But she has the game. She had a great tournament. It's no surprise since I think everyone has known the talent has always been there. Hopefully, she will continue to play at her best and many more slams could follow.

He can still easily become the GOAT, but it will not be easy. He will not be playing the U.S. Open, IMO. I do think there's a chance he plays in Australia (they will have to lift his 3-year ban).

Nole didn't play at his absolute best the last two matches but didn't need to. I'm thinking we will not see him again until September or October, but I still think he could finish the year strong and maybe even win the World Tour Finals. He's still the best player in the world, IMO.