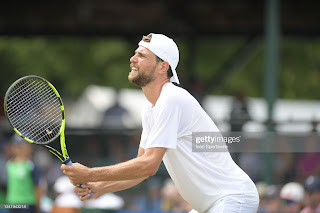 Here's a shoutout to the quartet of winners from this past week.

Maxime Cressy won on grass in Newport for his first ATP title. I think he will win more, especially on grass. he beat Isner in the semis in a great match. He then beat Bublik in the finals, coming from a set down.

Francisco Cerundolo won the title in Bastad for his first title. He knocked off top-10 Casper Ruud in the second round and then beat PCB in the semis and Sebastian Baez in the final. Great week for Cerundolo.

American Bernarda Pera won her first career title by taking the crown in Budapest. She didn't lose a set all week, knocking off Bondar in the semis and Krunic in the finals.

The veteran among the winners was Petra Martic. She won her second WTA title with the win in Lausanne. She beat BB in the quarters, CarGar in the semis and then Danilovic in the finals. Martic lost only one set, to CarGar, throughout the whole week. Martic has been playing well. She lost in the fourth round at Wimbledon (after beating Jessie in the third round) to eventual champion Rybakina.