Slash Nation: Slash still has time to gain momentum in 2022 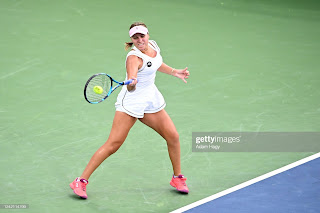 What to make of Slash?

I want Slash to do well, but right now it's just one struggle after another.

After coming back from a big injury, she did not do well at the start of the year. Then she got injured again.

Then last week she came back to play an exhibition match and got waxed by Coco. She looked like she should be playing on the challenger tour, or maybe even college, or maybe even high school. It was really bad. Then the news broke about her ex-boyfriend being suspended from the tours for 12 years due to match fixing. Let's just say it's been a bad week for Slash.

Now she's in D.C. and I want her to win real bad, but I won't be surprised if COS cleans her clock. Slash needs matches and confidence, and I don't think she will get either of those before the U.S. Open.

Hopefully, she can have a solid fall and start to get ready for 2023. That might be a great year for her, it can't be any worse than this one -- can it?