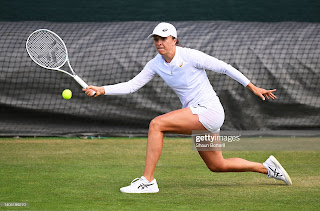 I'm starting something new called TKJ's Power Rankings. I will try to do these after every tournament for both the men and women.

So here's the women's Power Rankings:

2. Ons Jabeur: To me she is the second favorite behind Iga at Wimbledon. She won a grass title and has been the second-most consistent this year.

3. Coco Gauff: Coco is coming off a French Open final (the first of many grand slam finals in her career). She will make a deep run at Wimbledon - just you watch.

4. Jessica Pegula: Jessie has put together a solid season, the best of her career. She is super consistent. It will be interesting to see how she does at Wimbledon.

5. Maria Sakkari: Sakkari is having another consistent season, but we're still waiting on that grand slam final. It could still happen this year.

6. Belinda Bencic: Belinda is quietly having a solid season (No. 8 in the race). I think she could be dangerous at Wimbledon and is probably being overlooked by most.

7. Beatriz Haddad Maia: Haddad Maia won two titles and made the semis in another tourney in the three-week grass circuit. There may not be anyone playing better right now. She needs to back it up with a big slam result.

8. Daria Kasatkina: She won't be playing at Wimbledon, but Dasha has put together a strong season (No. 6 in the race). She still has big days ahead of her, especially on the clay.

9. Jelena Ostapenko: Jelena is having a good season and she is coming off a final in Eastbourne (losing to Petra Kvitova). Penko could be a bit of a darkhorse at Wimbledon.

10. Petra Kvitova:  She just won her 29th title and if she keeps that up she's a threat to take down Iga and win another Wimbledon.