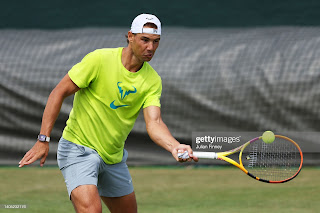 I'm starting something new called TKJ's Power Rankings. I will try to do these after every tournament for both the men and women.

So here's the men's Power Rankings:

1. Rafael Nadal: This is obvious since Rafa has already won two slams this year. Can he complete the Grand Slam and win Wimbledon and the U.S. Open? I wouldn't put it past him.

2. Carlos Alcaraz: OK, so he's my favorite so maybe I'm a little biased. But I think Carlos will win a slam before the year is up.

3. Novak Djokovic: Novak had a solid clay-court season and to many (including me) is the favorite to win Wimbledon. He needs to do win it, it will be his last slam this year and last matches until at least September.

4. Casper Ruud: I know he's a clay-specialist, but he did make a slam final and he's been really consistent this year.

5. Stefanos Tsitsipas: Stefanos finally won a grass title and could be a threat at Wimbledon. He still has the ability to win a slam and probably will at some point.

6. Matteo Berrettini: With two grass titles this year, Berrettini is definitely among the favorites at Wimbledon. He missed time due to injury, but he's still one of the top players in the game.

7. Daniil Medvedev: He won't play Wimbledon, but Meddy showed he's still one of the best in the world. he had a solid grass season and will be one of the top players during the summer hardcourt season.

8. Alexander Zverev: Sascha is out for who knows how long, but once he comes back I expect him to continue one of the best seasons of his career.

9. Taylor Fritz: Taylor is coming off a grass-court title and is showing that he is the top American player. I look for his success to continue all season.

10. Felix Auger-Aliassime: Felix is still having a great year and I think he could be a darkhorse at Wimbledon that no one is talking about. I expect him to have a strong hard-court season as well.