TKJ's thoughts: Wimbeldon is doing the right thing, WTA and ATP are not 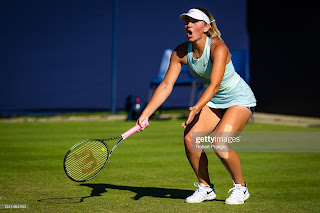 Wimbledon is about to start and I am very excited.

I am very excited despite the fact that there will be no ranking points for the players. That disappoints me.

I believe Wimbledon got it right by banning Russians and Belarussians. For the WTA and ATP to then get rid of ranking points is like saying they support the war against Ukraine. I know that's not what they mean to do, but that's the way I take it.

Everyone keeps screaming about discrimination, but no one is looking at things from Ukrainians point of view. No one seems to care about them at all. Trust me if Russia was attacking the U.S. there would be no Russians allowed in the U.S. - I promise you that. I always believe you have to put yourselves in other people's shoes, but no one is doing that with this war. It is not the Ukrainians fault they are being attacked.

I know this isn't the Russians and Belarussians fault, but it is their country and their leader - and they allowed him to become a dictator. They created this monster and they deserve to pay some price. They need to feel the heat. They must stand up for what is right and they are not. There needs to be more sanctions and there needs to be sanctions against the people of Russia and Belarus. I have no doubt if the war continues eventually countries will start to ban Russians and Belarussians. Already, Czech Republic, Greece, Ireland, Portugal, Malta and Spain are not accepting Russian Visas. It's just a matter of time and it's what should happen.

Also, it was great to see Hubert Hurkacz donating money to Ukraine for every ace he hits. We need to see more of this.

So as usual, I applaud Wimbledon - the greatest tournament in the world -- for doing the right thing. They stand with Ukraine and so do I.