TKJ's thoughts: Marta, King Carlos down and up at Wimbledon 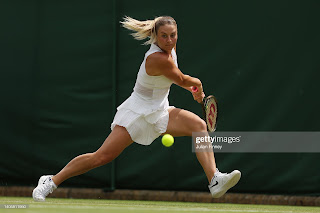 Here's some of my thoughts on Day 3 of Wimbledon:

First, Marta lost a heartbreaker. She served for the first set, had 3 set points and lost 7-6 (6), 6-2. It was a super close tiebreaker. If she gets that first set, I like her chances of winning the match, but that's the way it goes.

On the bright side, she's right there. It's not like she's getting blown out a lot. Marta will be fine.

She came back and won in doubles with Martincova in straight sets over LLD and Brengle. Marta played well in doubles and I think they could do some damage in women's doubles. We shall see.

King Carlos won his match over Griekspoor in straights. Carlos looked better today and I still think people are sleeping on him winning this slam. He's very capable! Let's do this King Carlos!

Nole cruised past Kokk and Big Foe won in straights. Big Foe has a serious chance of making it far here. I would love to see it! DMV represent!

Isner beat Andy in a 4-set tussle. Isner looks good and can't be overlooked (but let's be real he never can be, we can't see over top of him).

Kontaveit got beat by Niemier, but that's not a real surprise considering Kontaveit had COVID recently and hasn't been playing well.

Jessie beat DV in a battle of two of my faves. It was a good match, Jessie could make a deep run.

Angie won in straights and an Angie-One fourth rounder would be epic.

Last but certainly not least, Emma lost in straights to CarGar. I'm not surprised, in fact I picked it at the start of the tourney. CarGar has been playing well and played well again today. Emma didn't play badly. I know everyone wants to rip on her, but she's doing fine. Everyone needs to calm their expectations down. She's only 19, give the kid time!