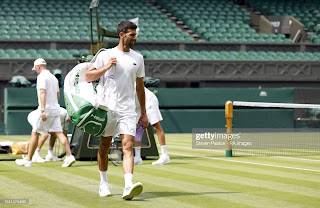 The Wimbledon draw is out and here are my picks for the tourney.

Novak Djokovic and Iga Swiatek will win the titles (shocking I know). Seriously, they are the favorites for a reason.

Then Nole beats Hurkacz and Rafa beats Berrettini in a five-set thriller.

That leaves the two GOATS to battle it out and this time it will be Djokovic coming out on top.

On the women's side, I have Iga beating Bianca Andreescu in the quarters, Simona Halep over Coco Gauff, Ons Jabeur over Marta Kostyuk (get it Marta!) and Maria Sakkari over Beatriz Haddad Maia.

In the semis, Iga takes out Simo and Ons beats Sakkari. That gives us an Iga-Ons battle in the final and I have Iga taking it.