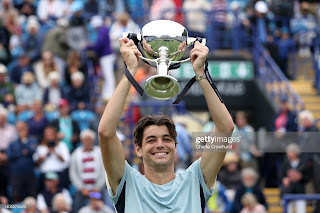 It was a great week of tennis last week. We had some quality champions and a lot of quality play to get ready for Wimbledon.

First of all a shoutout to Taylor Fritz, Stefanos Tsitsipas, Caroline Garcia and Petra Kvitova. They each won a title last week.

Fritz won the Eastbourne men's title, for his third ATP title. Fritz beat Maxime Cressy in the final, 6-2, 6-7 (4), 7-6 (4). He only lost two sets in the tourney, including a great three-set win over Alex De Minaur.

Fritz has the game for grass and could definitely go far at Wimbledon this fortnight.

Tsitsipas may have finally conquered grass. He won in Mallorca, beating Roberto Bautista-Agut, 6-4, 3-6, 7-6 (2), for his ninth ATP title. He only dropped two sets and looked solid in winning the title.

It will be very interesting to see how he performs at Wimbledon. Is he ready to make a big run there?

This is her eighth WTA title and first since 2019 (Nottingham). She won some great matches, including the final. I was sure Bianca would win, but Caroline played great. She also beat Alize Cornet in a great match and Sabine Lisicki.

Garcia could be a factor at Wimbledon and could meet Emma Raducanu in the second round, what a delicious match that would be.

Veteran Petra Kvitova won her 29th career title and she looked dominant all week. She lost only one set (to Katie Boulter) all week.

There's no doubt the two-time Wimbledon champ is a threat this year at Wimbledon and rightfully so is now among the favorites on the women's side.

If she plays like she did this past week at Wimbledon she will go deep.