Marta Nation: Marta out in singles, but going strong in doubles 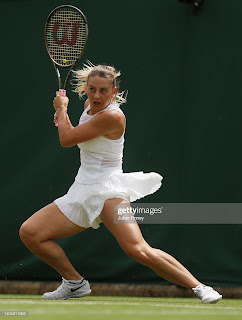 Marta had an up and down day. A tough loss to Zhang in singles.

She served for the first set, had 3 set points and lost 7-6 (6), 6-2. It was a super close tiebreaker. If she gets that first set, I like her chances of winning the match, but that's the way it goes.

On the bright side, she's right there. It's not like she's getting blown out a lot. Marta will be fine.

I love Marta in singles, but right now she is No. 47 in the world in doubles. She and Ruse are ranked No. 21 as a doubles team and they are scheduled to play together again after Wimbledon. They have a shot at making the year-end championships and that would be awesome!

Marta is also playing mixed doubles with Kubot. He is an experienced doubles player, former No. 1 in the world. He's won two grand slam men's doubles titles, but no mixed doubles. There's a first time for everything.

The mixed doubles field is stacked, including the return of Venus (with Jamie Murray) and the pairing of Coco and Jack Sock. I think I'm as excited for the mixed doubles as I am anything else. It almost feels like an Olympic field.

No matter how Marta does I think it will be a great learning experience for the now 20-year old! She's getting old already.