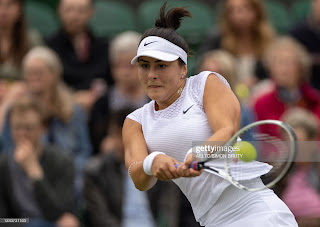 Here are my predictions for this week's tourneys in Canada.

I have Tsitsipas beating Ruud (yes, Ruud is capable of losing, and yes he's capable of playing on a surface other than clay) in one quarter. I have Rafa beating Schwartzman in the other quarter and then I have Tsitsipas knocking off Rafa in the semis. I'm not convinced Rafa is ready to win a title with his health issues right now.

I then have Medvedev beating Tsitsipas in the final.

In the other quarter I have E. beating Tomljanovic and Bianca beating Pegula in the other. Bianca will then beat E. in the semis.

Once Bianca gets on a roll she's unstoppable and I see her beating Aryna in the final. The legend of Bianca continues.