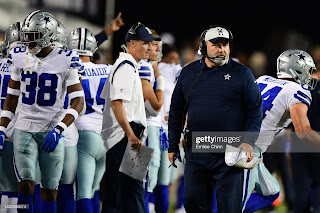 So the Cowboys played a preseason game -- and they lost. I know it's only preseason but I found it fitting.

It reminded me why this team won't be as good as everyone thinks. First, we have no idea what Dak's injury is really like. Will he return to his old self, even if he makes it back on the field?

Most importantly, we still have the same stupid coach making bad decisions. At the end of the half why on Earth would you go for a field goal, when the kicker (who is actually the punter) can't make a 29-yard FG? There was no way he was going to make it from 52 yards. Try for a touchdown, it's not hard to figure out. The offensive play probably wouldn't have worked, but there was a better chance for that (and more points) than for a FG by your punter.

One positive I saw was the play of the rook Micah Parsons. He is going to be special and that will certainly help the Boys' terrible defense.

This week we have Arizona, let's see what we can do. Let's go Cowboys!