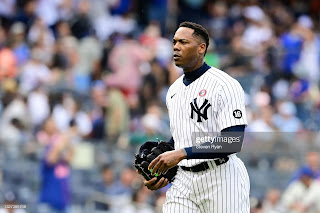 I known it's been a while since I wrote about the Yankees, mainly because they suck right now.

The Yankees have been underachieving all season. It all starts with that useless GM Brian Cashman and manager Aaron 'needs to go back to ESPN Sunday Night Baseball' Boone.

Both of them need to go. The Yankees are still in contention for a wild card spot (barely), but there's no reason to think they will suddenly turn things around.

The offense is awful most nights and the pitching isn't much better. I know Kluber is injured, but we can't put their failures this season on a washed-up injury-prone pitcher (I don't care if he had a no-hitter, he's not that good).

Jameson Taillon is not the answer either. Chapman at times looks -- old.

But the player I have the biggest problem with is our 'ace.' Seriously, we play Gerrit Cole all that money for this crappy season. No matter what the rest of the team does I expect our ace to go out there and perform like an ace, not like the rest of the crappy pitchers we have.

Cole has been missing and I'm starting to wonder if we have another Sonny Grey on our hands. Can cole handle the bright lights of the big city? Right now it doesn't look like it.

Right now I would be fine with trading away some major pieces and staring to rebuild, because I don't think this group has what it takes to win a championship.