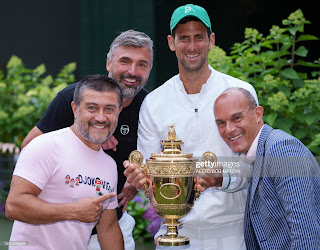 Nole wins his 20th slam and becomes the GOAT!

Congrats to Novak Djokovic for winning his 20th and 6th Wimbledon in 4 sets over Berrettini, just like I said.

Nole is now tied with Fed and Rafa with 20 slams, but we all know he's better than those two. He has the head-to-head edge over both and has been No. 1 more weeks.

He's not sure now if he will play in the Olympics. I don't think he should. It's too quick of a turnaround. With it being two-out-of-three sets he's more likely to get beat.

The main goal now should be winning the U.S. Open and winning the calendar slam, which hasn't been done on the men's side since 1969. That was even before I was born!

He is the greatest and he will continue to win more slams and probably end up with more than 25, more than any tennis player man or woman.

This will be the last tennis blog I do, until at least the Olympics. But I do hope to have more on other sports in the coming weeks!