TKJ's thoughts: Nole on his way to being the GOAT! 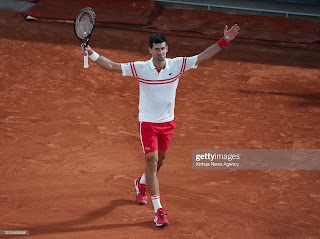 Can you feel it?

I can. I can feel the greatness about to once again take over the tour (well, he really never stopped). Nole is about to win his second French Open, his 19th slam. He will be just one behind Fed and Rafa all-time.

Maybe more importantly, Nole will be halfway to a grand slam. He could end the year with 21 slams and become the GOAT. Feel it, breathe it, prepare for it. He's coming. I think most people know it, they just don't want to see it so they are in denial and that's OK.

I don't care if people like Nole or not, I only care what I think. And I think he's the best that ever lived and he's playing some of his best tennis this year at age 34.

He's got plenty left in the tank. Not only can he move to the top of men's tennis, but he can easily pass Serena and Margaret Court.

Nole has only lost 3 matches this year - 3. This could end up being one of his best seasons ever (as long as he doesn't hit a linesman with a tennis ball).

Nole is the greatest returner in the history of the game, he's an incredible mover who can turn defense into offense, and he's as mentally strong and conditioned as they come.

But the reality is Nole is going to keep winning and winning and he will end up with more slams that anyone else. And everyone that knows tennis, knows it!

I for one can't wait to watch him continue his dominance and see him to go to heights no one else has as career begins to wind down. He is the best and he will be the GOAT!

Let's do this Nole!