TKJ's thoughts: Krejcikova had a great tournament, but she is not the future of tennis 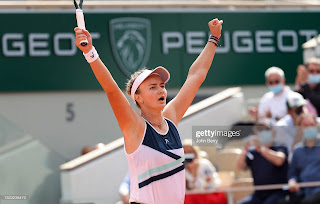 It was a good win for Barbora Krejcikova over Pavs to win her first (and only) slam.

Good for her. She's a solid player, a great doubles player. But let's get this straight - she is not some future great all-time champion.

I'm already tired of hearing the so-called experts trying to spin this as some incredible story. Let's call it what it is - the women's tour is not strong right now and she took advantage of it. She will not win a singles slam again!

I hope she enjoys it. There's nothing wrong with taking advantage of your opportunity, but don't act like she is the next Serena Williams and is going to dominate the tour.

Right now that is the problem - no one is dominating. The women's tour has become like golf, you never know who might win a major and when they do - good for them. It doesn't mean there going to be Tiger Woods.

I hope she enjoys it and soaks it in and maybe we will see her going further in slams (hopefully she won't completely Ostapenko it).

I watched the final and it was OK. They were both nervous. The quality wasn't the greatest and that's OK. They're Krejcikova and Pavs not Rafa and Nole.

Karolina Pliskova: now wondering is she will ever win a slam after seeing her countrywoman pass her by.

Iga Swiatek: young, but is she really the future of the game? I don't personally think so, maybe also another one-slam wonder.

Serena Williams: The GOAT, but an old GOAT who may be running out of time. Although the French Open may show there is still time left.

Bianca Andreescu: This girl can not stay healthy long enough to win many more majors.

Elina Svitolina: Still hasn't won a slam, will she ever?

Slash Kenin: Has one slam and another final, but will she keep doing it consistently?

Aryna Sabalenka: Has yet to make a deep run at a major, time keeps ticking away.

Simona Halep: Isn't getting any younger. She has 2 slams, but how many does she have left.

Naomi Osaka: Who knows when the real No. 1 will be back? Definitely the closest thing to a dominant player we have in the top 10.

Ash Barty: The party's been good, definitely the most consistent player on tour. However, she's out with an injury so who knows when she'll be back and the reality is she still only has one slam.

The future looks bright with the likes of Coco and Marta, but we're in a transition period wehre basically anyone can win a slam.

Personally, I think it's kind of fun and I like it. It's cool not knowing who is going to win before each slam starts and knowing upsets can happen at any time. But I don't want to see it last for too long. You still need a queen to rule the throne. Most importantly, let's not pretend that everyone that wins it's the next great superstar.

Call Krej what she is a player who got lucky and had an amazing two weeks and achieved a lifetime dream. Good for her. Enjoy your time, your 15 minutes of fame - reality will come back soon enough. In the end she will be knows as a great doubles player, who also won a slam with a great two weeks of tennis.