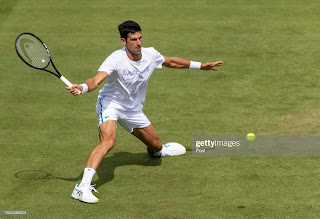 Well, this is easy.

I'm picking Nole to win his 20th slam and 6th Wimbledon title. The only person that could stand in Novak's way is Novak.

I have Berrettini beating Sascha in the quarters and Medvedev beating Fed in the other quarter.

Medvedev will then knock off Berrettini in the semis and Nole will win the final in 4 sets.

Then we will have three players with 20 slams each! Nole will win No. 21 at the U.S. Open to become the new GOAT and win the Grand Slam (Golden Grand Slam with an Olympic Gold Medal).

It's time for everyone to face the facts that Nole is simply the best of all-time and he's got plenty left in the tank!