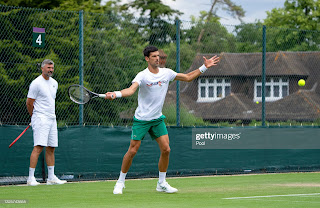 Here's my picks for the opening Monday of Wimbledon:

Petra d. Sloane in 3: This will be tough, but Petra is playing well.

Basilashvilli d. Andy in 4: Andy will take one set, but he just doesn't have much left in him.

Aryna d. Niculescu in 3: This could be an upset, but I think Aryna pulls it out at the end.

Tsitsipas d. Foe in 4: Tsitsipas might struggle early, but he'll figure it out against a struggling Foe.

FeLo d. Evans in 5: FeLo still has a little left in the tank.

Venus d. Buzarnescu in 3: Venus still has a little left in the tank.

Maddie d. Swan in 2: Maddie could go a long ways this year. Did I really just type that?

Slash d. Wang in 2: Slash will take advantage of a weak draw - I think.

Kohls d. Shapovalov in 5: Kohls also still has a little left in the tank.

RBA d. Millman in 5: This could go either way. I went back and forth on it, but I'll go with the seed.

O'Connell d. Monfils in 5: I know this is an upset, but would it really be a big surprise?

Pliskova d. Zidansek in 3: Let's not forget Zidansek was a French open semifinalist. This could be an upset, but I'll go with the favorite.

Sinner d. Fucsovics in 5: One of the best matches of the day, but I'll go with the youngster.

Pegula d. CarGar in 3: I won't be surprised if CarGar wins this.

DCR d. Hercog in 3: I love DCR so I will go with her, but I won't be surprised if Hercog wins.

Fokina d. Kudla in 5: This should be a great match, but I'll go with the youngsetr.

DV d. Potapova in 2: This will be two close sets.

Rybakina d. Kiki in 3: I wish Kiki could win this, but I don't see it happening. She will be lucky to win a set.

Demin d. Korda in 5: This should be a great match, but Demin has been playing well.

Rogers d. Stosur in 2: Stosur has nothing left in the tank.

McHale d. Brengle in 3: Someone has to win this.

Schwartzman d. Paire in 5: If Paire shows up this could be quite the entertaining match.