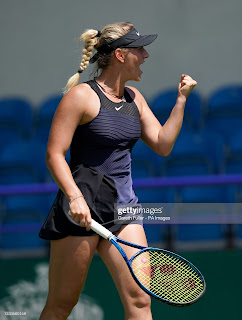 Tsonga d. Gerasimov in 3: Is Tsonga still playing? Why am I picking him to win a match? Homer pick.

Ruusuvuori d. Ramos in 2: Ruus' name sounds like he should be a wrestler not a tennis player.

Seppi d. Nishoka in 3: Why is Seppi still playing? He can still win a few matches on grass, I guess?

Travaglia d. Pella in 3: Pella is bad on grass.

Petra d. Piter in 2: Who in the blue moon is Piter?

Angie d. Yashina in 2: Who in the blue moon is Yashina? Easy win for Angie in her home country.

Bertens d. Rogers in 3: Bertens' farewell tour will net her at least one win.

Marta d. Sevastova: Homer pick. This is a tough one, but Marta's my fave so it's actually a no-brainer.

Pavs. d. Penko in 3: Will Pavs carry the momentum to grass?

Golubic d. Stosur in 2: Why is Stosur still playing?