TKJ's picks: Marta, Nole will cruise to next round 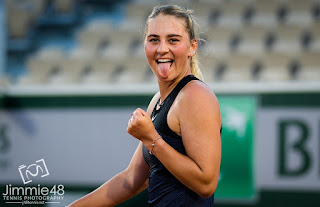 Here are some picks for tomorrow's French Open:

Nole d. Berankins in 3: Nole is headed to a showdown with Rafa.

Swiatek d. Kontaveit in 2: Swiatek may not lose a set this tournament.

Fed d. Koepfer in 3: Another easy pick. Fed is looking solid for having been out of the game for a while - look out Wimbledon.

Slash d. Pegula in 3: This should be a battle, one of two All-American battles. It could go either way, but Slash seems to be playing better in this tournament.

Rafa d. Norrie in 3: The easiest money in the world. Norrie will be lucky to win more than one game.

Coco d. Brady in 2: This All-American battle will be two close sets. Coco is on a mission.

Sloane d. Muchova in 3: This could go either way, but I like how Sloane is playing.

Sakkari d. Mertens in 3: Another close call but I like Sakk attack so we'll go with her.

Berrettini d. Kwon in 3: This shouldn't be competitive.

Sinner d. Ymer in 3: Another young gun who will cruise to a victory.

Jabeur d. Linette in 2: Jabeur is having a good year.

Musetti d. Cecchinato in 5: I like this youngster's game. This would be a great win for him.

Marta d. Gracheva in 2: The only match that matters will see Marta advance to the fourth round for the first time -- many more times to come.