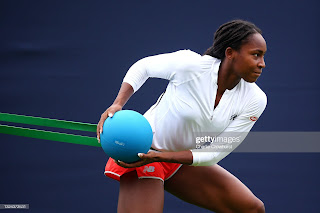 It's about to be a big week leading up to Wimbledon and going big and (homerish) on my picks. Coco Gauff will win her third title!

We start with the men in Eastbourne. I am taking Opelka for the title over Bublik! Yes I said Bublik! Book it!

I have Bublik beating Monfils in the semis and Opelka beating Demin.

In Mallorca I've got Medvedev knocking out PCB in the semis and Khachanov taking down Sammy. Yes, the Russians are coming.

In the finals it will be Medvedev over Khachanov. Book it!

For the women - in Bad Homburg I've got Angie beating Petra in the semis. I've also got Cornet beating Pegula. Did you see how great Cornet was in Berlin this week?

In the finals it will be Angie beating Cornet. Book it!

I saved the best for last. Here's what will happen for the women in Eastbourne.

Maddie will beat Aryna in the semis and Coco will beat Jabeur. Coco will then beat Maddie in the finals. Book it.