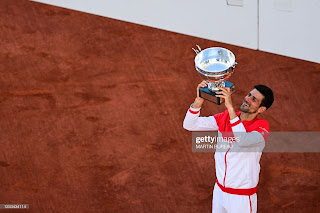 Nole rallies to win his second French and 19th overall slam, just one behind the GOATS! It wasn't easy but he gutted it out like the champ he is.

Nole is now halfway to the grand slam and he can tie the GOATS at Wimbledon and cement his place in history at the top.

As for Tsitsipas I feel bad for him, but he will have his day. He will win many slams in the future.

Now Nole should get some rest and get ready for Wimbledon, which is coming up quick. It's going to be a crazy hectic summer and I can't wait for it.