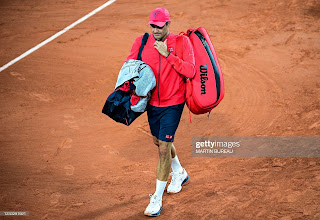 Sunday may have been the last day for Fed and Serena at the French Open. That's what everyone is talking about.

Maybe it was, maybe it wasn't. The one thing I do know is they are two great champions, who deserve to be treated with respect. It would be a shame for Fed's last match to have been at in front of no fans.

The French Open has been a joke with the night matches, which honestly no one wants to play. I think it would be a shame if it was Fed's last match, but if it is it is. There's not much we can do about it.

We must appreciate Fed and Serena for the greatness they brought to the sport as well as the popularity. They are the two GOAT's (although I don't believe in GOAT's) in my mind and they will be missed once they leave.

However, they're not done yet. Wimbledon is ahead and if they each have one last great run in them that's where it's likely to come. I can't wait!

Email ThisBlogThis!Share to TwitterShare to FacebookShare to Pinterest
Labels: Tennis