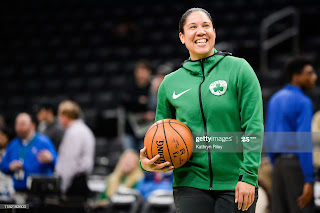 Last week was a big one for DWB!
Kara Lawson was named the new head coach for Duke Women's Basketball and I don't think they could have made a better choice.
Kara is smart, experienced, has a great personality, passionate - she is everything you can want from a head coach. I know my Boston Celtics were sorry to see her leave, but we're happy for her. I am very excited for what this means for my favorite program in the world.
She has already reached out to former players and had a zoom chat with them. You can tell she has great ideas. She has an understanding of what it takes to win and she knows Duke belongs at the top of the women's game just like it was when she played at Tennessee.
To me one of the most important things about Kara is - she's a winner. It's what she's done at everything in basketball and I know DWB is in good hands. I'm looking forward to the upcoming season and going through the process of watching the program grow into a powerhouse again. I became a DWB fan in 1999 after they beat Tennessee in the Elite Eight. Soon after that I became a season-ticket holder and stayed that way until a few years ago. I've already ordered season tickets again and can't wait to be back in Cameron Indoor Stadium again!
I can remember big games there against Connecticut, Tennessee and North Carolina where there were sellouts and the place was rocking just like for the men's games. I have no doubt it will be that way again soon! There's no feeling quite like CIS when it's full and the place is rocking. It gets so hot you can barely breathe. It's the best atmosphere in all of sports.
I'm sure Kara will bring in some big-time recruits and get us back to the top soon. After a long absence it's where we want to be and where we belong!
On a programming note, I will have more blogs soon. With sports coming back in full-force I will have different blogs for different sports, but all of it can be found here on this site. For DWB Nation, I plan to have previews on the games, recaps, Players of the Week and much more as the season goes on. I can't wait for the great things that are coming to DWB!
Go Duke!
Posted by Tommy Keeler at 12:56 PM