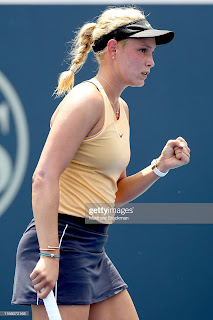 I'll try to make this short since it's late and there's lots of great tennis to come tomorrow.

First, it was another great day! Donna Vekic won on court 10, which is my favorite court. It's so close to the players and I got plenty of great videos and pictures!

Maria Sharapova lost and so that sucked, but at least I got to see her win one match!

There was some great doubles action that I checked out as well.

For the second straight night I left early and I'm glad I did. I was able to watch the Nick Kyrgios-Karen Khachanov match on Tennis TV! Nick was out of control and needs to be fined and suspended. But I have to admit it was entertaining!

Tomorrow is round of 16 day! Everyone plays and I'm excited for it!
Posted by Tommy Keeler at 9:18 PM