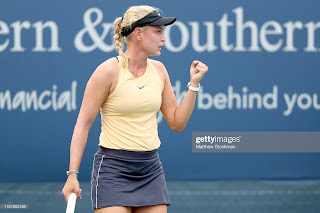 Another great day of tennis!

The highlight for me was watching my second favorite women's player, Donna Vekic, win in the very small court 4.

Obviously, the stadium court was awesome for the day session. Stan Wawrinka won in 3 sets, Venus Williams won in 3 sets (both in tiebreakers). Then I got to see my favorite men's player, Novak Djokovic, win in straight sets. I also got to see a little of Roger Federer winning.

One of the best matches of the day was Madison Keys beating Garbine Muguruza on Grandstand court. Daria Kasatkina's win over Barbora Strycova on stadium 3 was also great!

Tomorrow will be another great day! Both Maria Sharapova and Donna will be playing at about the same time (my worst nightmare), but hopefully they can both come away with a win!