Day 2 of 18 days of pro tennis: Coco is great again and a guide to the matches to watch Monday 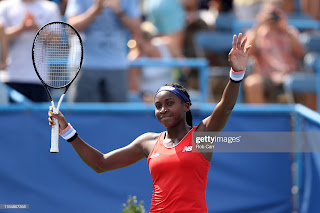 Another day of tennis in the books!

Day 2 at the Citi Open was great! Cocomania continued and she won again. Coco played much better and there was another great crowd. It was almost a sellout -- for qualifying!

Play begins at 1, better than the usual 2, but I'd still like to see this tourney get with the program and make it 11 like every other tournament out there not named Wimbledon.

There's still 5 matches on some of the courts so play will go on late.

Here's my thoughts on what some of the best matches to go see will be.

There's only 4 matches on stadium court, starting at 2 p.m. The last two are definitely the best two. First at 7 p.m it will be Nick Krygios and Stefanos Tsitsipas against recent Wimbledon champs Juan Sebastian Cabal and Robert Farah. This match should at least be entertaining. Hopefully, Nick and Stefanos won't take swings at each other. But whenever Nick is playing you never know what might happen.

The final match of the day on stadium court is between two of my faves Genie Bouchard and Lauren Davis. This will be tough for me to watch since it will be hard to root for anybody. It should be a competitive match.

On the John Harris Court, where there are no women's matches (what's up with that?) the best match of the day is the fourth one. It's between Matthew Ebden and Tim Smyczek. Every year Smyczek has done well here (by his standards) and he is a crowd favorite. This could be the most entertaining match of the day.

On the grandstand court, where it's all women's matches, Jennifer Brady against Sofia Kenin, the fourth match up, should be the best one (are we seeing a trend here?). I think Kenin could win this tourney but Brady is always fiesty.

Coco Gauff is also playing doubles in the third match on that court with Catherine McNally against Hayley Carter and Maegan Manasse. This shouldn't be very competitive but if you want to see Coco again here is your chance.

Court 4 has five matches, the first one features up and coming Iga Swiatek. Another youngster who could do really well in the future. She plays Ons Jabeur. In the final match on that court, Donald Young is playing Hubert Hurkacz. DY seems to always play well here. This should be a good match.

Court 5 has 3 matches and 2 of them are doubles. The second match features two pretty good doubles teams. Rajeev Ram and Joe Salisbury play Lukasz Kubot and Marcelo Melo. If you like doubles - this should be one to see.

Here's my picks for the singles matches: