Day 1 of 18 on the tennis trip of a lifetime: Coco dominates the day! 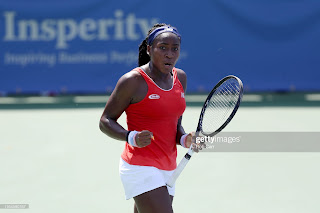 It was a good day! The highlight tennis-wise was seeing Coco Gauff and maybe more importantly Coco-mania! On the court Coco looked OK. I think she could have played better and she will have a tougher opponent tournament so she needs to pick it up if she's going to win this tournament like I predicted.

It was the biggest crowd I've ever seen for qualifying. As I was getting ready to go into the new main-concession stand area (which I didn't know existed until after I ate) new Citi Open owner Mark Ein was walking outside with some people and said 'this is crazy.' It indeed was.

The main reason is was so crazy was Coco-mania. Everyone wanted to see the future superstar and now that I've seen her I can tell you she's got some real weapons and athleticism. She definitely has a chance to be special. The stadium court was about 70 percent full -for a qualifying match, which is more than it is for many matches during the week.

All in all, I like the upgrades Ein has made. There seems to be more places for people to go and chill and trust me with this heat that is much needed. Tomorrow I hope to check out the new main concessions area and we'll see how good and expensive the food is.

There is a Jubilee Ice Cream stand selling ice cream for $10! There is also another stand where you can get a Hagen-Dazs bar for $5. Which do you think I went too? I have to admit I am tempted to see what the $10 ice cream taste like, Gold I would hope!

I actually have a good seat right under the press box (naturally), but the problem with having a shaded seat is everyone wants to take it. I'm not worried about sitting in my assigned seat, especially this early in the tourney, but if I get too hot I know where I'm going!

There should be some OK qualifying matches tomorrow but once again Coco will dominate the day! Starting with tomorrow's blog I will take a closer look at some of the top matches coming the next day and make some picks. I can already see I'm going to have a tough time deciding which matches to go to this week. Of course that will get much tougher when I go to Cincy in a few weeks! Decisions, decisions - it's a tough life but someone has to do it!